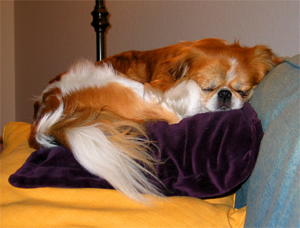 Today makes four weeks since I adopted Luna. How’s it going? Has the dog adjusted? Better yet, have I? Was she a writing distraction?

All’s good, and the writing, no problema. I wrote about 75 pages in the past four weeks. I was eager to finish my first draft, true, but I’d also like to suggest a positive correlation between dog ownership and my writing output:

1. Boundaries: I suggest that having a canine boundary helps me manage my time and increase my efficiency. Luna forces my hand in the mornings, that’s for sure. Doesn’t matter that she goes back to sleep ten minutes later, she still jumps on the bed at a reasonably early (but not too early) hour.

2. Empty-brain time: My dog, she’s not sporty, not with her six-inch legs and lone eye. On walks, I slow way down and accept the trees and the sky and the screeing hawks as entertainment. In other words, I live in the moment. I suggest that this has helped my creativity.

And, last but not least:

3. Lessons in suspense: Luna and I play a game in which I tease her with my hands under a blanket. She goes after my hands with much growling (positively ferocious) and digging around and tail-wagging.

I suggest that the art of fictional suspense resembles the art of making a dog go wild with anticipation: judicious use of suspenseful pauses. In the blanket game, I freeze and Luna responds with paroxisms of spazziness. Remember being tickled as a child? It’s like that: When are the hands going to move? Where will they land? What the heck will happen next?

It struck me that novelistic suspense relies on the same type of tension. We see this all the time. Just when we’re getting somewhere, a scene ends, leaving us hanging while we move into the point of view of a different character. The old cliffhanger method as seen in many a thriller.

But not every novel is a thriller. Suspenseful pauses can function on subtle levels too. What I’m suggesting is that quiet moments can also add to overall suspense. Maybe these are character development scenes or set-up scenes for future action — these scenes must have a purpose, but not every scene must hurdle the reader around a loop-di-loop.

Quiet scenes can introduce complications, raise ancillary questions, spotlight inconsistencies in our characters, further subplots. They, in fact, can support the main story arc with underlying layers of unanswered questions, some to be answered sooner (will Biff call Buffy like he promised?), some to be answered later (why is Biff acting like such a jerk anyhow?). Unanswered questions raise suspense.

I suggest that what appears to be a cessation of suspenseful movement, isn’t (in the hands of an adept novelist). I’m no expert, of course, because I’m still learning how to handle suspense myself. I simply suggest that what I’ve pondered here, is indeed, worth pondering.

And, if Luna is any indication, anticipation never gets old.

Care and feeding of an author = sharing. :-)

8 thoughts on “Suspense and My Dog: A Lesson”

I've been writing for awhile. I recently started getting novels published. It's been a loooong journey, and I hope to stay on the path. Red wine helps. So does showing warts and all (sometimes) on this blog.